So one of the things we’ve been doing the past few weeks is implementing a new wheel and tire model.

The previous wheel model was an overly simplistic “tweel” which made no distinction between tire and wheel - there was just a straight beam from the axis to the contact patch. Not only was this fundamentally incorrect but it created stability and handling problems and didn’t allow for realistic wheel and tire damage.

We’ve redesigned the wheel model and it’s far more physically correct. The wheel and tire are separately simulated, so a lower profile tire will have sharper corner response, and the tire realistically absorbs lateral force without transmitting it unnecessarily to the suspension components. 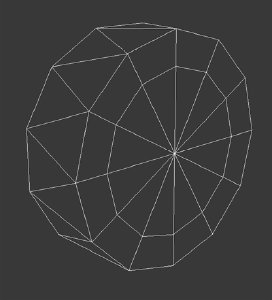 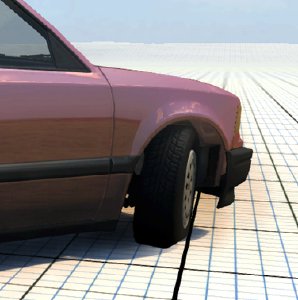 In addition, the wheel can be bent and damaged, and the tire itself can be deflated and ripped apart. The wheel is also stable and rigid at a realistic weight, something quite difficult to achieve with these kinds of physics.

Here you can see a bent hubcap (after an encounter with a curb), which wobbles as the wheel spins. In addition, the rear tire in the picture is deflated. 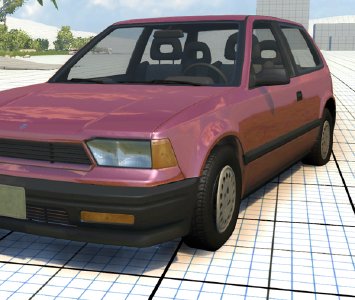 A disgusting-colored Grand Marshal rightfully has a bent alloy and a flat tire after drifting into a curb: 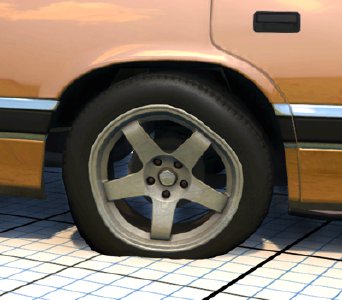 Since much of BeamNG’s functions are in Lua, one could code a new tire model quite easily. We coded the detaching hubcaps in an afternoon - no manual structure had to be made. Now it’s as simple as setting a few parameters in the vehicle’s files to have stable, realistic-weight detaching hubcaps. There’s really no limit to the kinds of structures you could script in Lua. Wheel spikes, anyone? 😀